Man Ruptures Throat after Trying to hold in a Sneeze 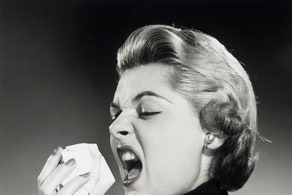 Holding in a sneeze can be pretty uncomfortable, and even a little painful — but for one man, it was catastrophic.

According to BMJ Case Reports, a man went to the emergency room after he suddenly started experiencing painful swallowing and a change in voice after holding in a sneeze. He told doctors he experienced a “popping sensation” in his neck after the sneeze, and some swelling occurred. When doctors looked closer, they say he ruptured his throat.

BBC reports doctors saw air escaping from the man’s windpipe into the soft tissue in his neck when they took an x-ray after his sneeze-gone-wrong. As a result, BBC reports he had to be fed through a tube for a week while the tissue healed. He’s now made a full recovery.

While this seems like a pretty dramatic outcome for a stifled sneeze, doctors say it could have gone worse. Holding in a sneeze, the report in BMJ notes, could result in damage to the ears, or event rigger a brain aneurism.

“Halting sneeze via blocking nostrils and mouth is a dangerous manoeuvre and should be avoided, as it may lead to numerous complications,” the report in BMJ says.

The reason holding in a sneeze can be dangerous is the build up of pressure, a doctor told Men’s Health.

“If you keep the mouth or nose closed, the generated pressure will back up into your head (sinuses), nasal cavity, or down the throat back into the chest,” Erich Voigt, M.D., clinical associate professor in the department of otolaryngology at NYU Langone Health, told Men’s Health. “Suppressing the sneeze by holding the nose or mouth leads to a noticeable increase in pressure, about 5 to 24 times of that during a normal sneeze.”

Luckily, serious injuries like rupturing one’s throat or having a brain aneurism are rare, Men’s Health reports, but ultimately, it seems like it’s better to be safe than sorry. Let those sneezes out.

Get an email when an update on this topic breaks

Join the Trentimes Community and earn on the side

Trentimes is the best thing that is happening to Internet Business

This site uses Akismet to reduce spam. Learn how your comment data is processed.